I’m in the process of converting my Lab Environment into a separated Storage Server and Virtualization platform.  Today we will focus on the Software RAID Storage Server side with UnRAID.

I’m using the below setup for a Test Bench.  Under no circumstances should you use a Desktop Setup for Production use, but for just a Test Bench to gauge performance of software, this is perfectly fine.

Setup is very easy, either create or purchase a USB Drive with UnRAID and boot from it. Once booted, you navigate to the Web Page for UnRAID.

Then I navigated to the Main Tab and configured my drives.  I set three for Data and one for Parity.  Then we played the waiting game.  For 12TB of usable space we are waiting nine plus hours for the Parity Disk to Sync.

As some veterans of UnRAID may have seen, I’m running version 6.18 in the above screenshots.  Since I have an NVMe M.2 SSD in this setup, I decided to use it as a cache drive.

I decided to run some benchmarks to see how our system fares.  The System is only outfitted with a 1G network card, so we are limited to about 117MB/s as a best case scenario.  We ran into an interesting situation though.  When benching we started with the 1GiB File Size in Crystal Disk Mark, but we got abysmal  numbers.

So decided to benchmark starting on the lower end starting with the 50MiB File Size and sure enough we hit speeds that maxed out the network adapter.  The trend continued on the 500MiB File Size as well. 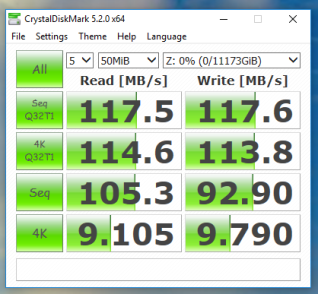 So I went back to the 1GiB File Size Benchmark and low and behold we were hitting good speeds. 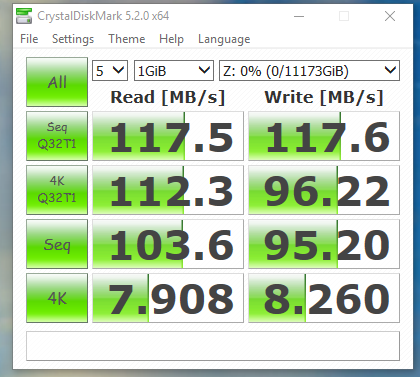 There must be some type of caching mechanism that determines when to write and read from the cache and when not to.  I think because the system had just added the cache to the array, it was not “smart” enough to use it yet.

We can see the test consistently max out the Network Adapter.

Here is a 2GiB File Size Benchmark, which is in line with the previous.

I would expect similar performance until we have a file larger than the 128GB Cache Drive. I’ll need to find a benchmark tool that can use 128GiB File Sizes, as CrystalDiskMark only goes to 32GiB.  I also plan to run these same tests with a 10G Network as well, but I am currently waiting on the arrival of Second Xeon D Motherboard and have yet to order the 10G Adapter for that board.  We also have a ZeusRam 8GB SSD that I am waiting to arrive.  That drive is a favorite of the FreeNas Crowd.